Why does my soap need to cure for weeks?

Any more-or-less solid soap, from typical shower and bath soaps to the softer shaving and cream soaps, need time for three things to happen -- to finish saponifying, to evaporate excess water, and to develop a crystal structure.

Handcrafted soap may be SAFE to use shortly after it is made, but it will not be at its BEST until some weeks or even months go by. Even if your recipe is designed to make a long lasting, mild, lathery bar, you will see the best of these qualities if you give your soap enough time to fully cure.

This applies to soap made with hot process (HP) methods as well as cold process (CP) methods, despite much advice to the contrary.

The first aspect of cure is to complete the last lingering bits of saponification to ensure the soap is safe to use on the skin.

When you unmold a soap, the saponification might be 99% done, but it's a very wise idea to wait for that last 1%. Anyone who has eagerly bathed with a freshly cut bar of soap and gotten some skin irritation has learned that lesson. A few days should be long enough for a properly made soap to finish saponifying.

At this point, I want to debunk the myth that hot process soap is 100% ready to sell right after it is made while CP soap takes weeks to get to that point.

It is true the HP "cook" causes the soap to fully saponify within a few hours. And it is true that CP soap takes longer; a typical CP soap might need 1-2 days to finish saponifying. When either soap reaches that stage, they are both technically safe to use on the skin.

Any soap, whether HP or CP, will be at its best only after completing the other two aspects of cure -- the loss of excess moisture and development of crystalline structure. In summary, the hot process method only speeds saponification; HP does not shortcut the rest of the cure time.

The second aspect of curing soap is the loss of water. Evaporation causes a bar of soap to lose weight, shrink somewhat in size, increase in hardness, and become less soluble in water.

To track the weight loss due to evaporation, weigh a freshly cut bar of soap right after it is cut and then every few days for a total of 6 to 8 weeks. If you create a graph that tracks these weights with time, you will most likely see a trend something like the chart below.

Since HP soap is usually made with more water than CP soap, the drying time for HP soaps actually takes more time, not less, before the soap stabilizes at a reasonably constant weight. Some soap makers allow for this by curing CP soap a minimum of 4 weeks and HP soap a minimum of 6 weeks. 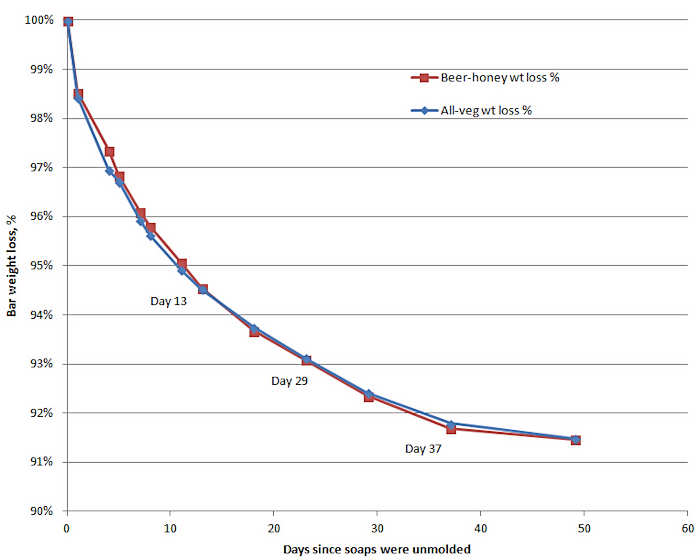 The third aspect of curing soap is developing soap's crystalline structure. This is a process that most people can't see or measure, so they tend to ignore or discount this as not being important. Since the process is not well understood by handcrafted soap makers, I want to talk about this in more detail.

What does a bar of soap looks like if we could peek inside with a microscope?

A bar of soap is a complex mixture of solid crystals entirely surrounded by a film of liquid. The crystals are made of soap molecules fastened together in various 3-dimensional arrangements. Crystals can be big or small, long or chunky. They can form many different shapes -- plates, irregular blocks, or even long spears.

I want to stress this point -- Even though we tend to think of a bar of soap as a dry solid, it's actually a unique mixture of solid particles and liquids. The liquid in a bar of soap is just as important to the overall performance of the soap as are the crystals of solid soap.

A single soap molecule in a bar of soap is a fatty acid ion usually combined with a sodium ion. The sodium comes from sodium hydroxide, NaOH. The fatty acids usually come from fats. Any given fat is a blend of several kinds of fatty acids.

When a batch of soap is made from fat, the soap molecules within the soap will vary in size and shape, depending on the different fatty acids present. The most common fatty acids for soapmaking, from the smallest in size to the largest, are lauric, myristic, palmitic, stearic, and oleic.

So how does this relate to how soap changes during cure?

When a bar of soap is newly made, the soap crystals contain a jumbled mixture of myristic, lauric, palmitic, and stearic soaps with a fair number of oleic soap molecules squeezed into the crystals for good measure.

When you begin to wash with a young bar of soap, it is often the case that the soap will not lather well at first. This is true even though the young soap is relatively soft and contains a fairly large amount of water. The reason for the poor lather is the larger amount of less soluble and less bubbly stearic and palmitic soap molecules in the liquid phase in proportion to the more soluble myristic, lauric, and oleic soaps.

After 4-8 weeks has gone by, the rate of water loss from a bar of soap will slow to a crawl (see the chart above.) The water content in the soap might be 50% to 70% of the water originally in the soap bars when they were cut. The glycerin and other water soluble chemicals will be more concentrated as the water content drops. At this time, most people say the soap is ready for use or for sale.

But is the cure truly done at this point?

At 4-8 weeks, it is true that most soap lathers better, lasts longer, and is milder to the skin, but soap often performs better as even more time goes on. If the cure was only about water evaporation, we should see little or no change in these soap qualities. What could be causing this gradual improvement, even after water evaporation has slowed to a crawl?

The high concentration of glycerin and other water-soluble chemicals in an older bar of handcrafted soap has an unexpected effect. Glycerin, along with table salt and certain other chemicals, has the ability to "salt out" soap when the concentration becomes high enough. (To learn more about salting out, read my article about cleaning soap scraps.)

Salting-out is the process by which soap molecules coalesce from a liquid form into solid soap crystals. Not every kind of soap molecule will salt-out to the same degree. Stearic and palmitic soaps salt-out quickly and well so they become concentrated in the solid soap crystals. Myristic and lauric and oleic soaps do not salt-out nearly as easily, so they remain in the liquid phase.

How does this salting-out affect the structure of the soap?

As the glycerin and other dissolved chemicals in the liquid phase become sufficiently concentrated, the stearic and palmitic soaps in the liquid phase will form solid soap crystals -- in other words, they want to salt-out. These soap molecules also gradually trade places with lauric, myristic, and oleic soaps in existing crystals.

As time goes on, the crystals in a bar of soap will contain more and more of the less-soluble stearic and palmitic soaps and the liquid phase will contain more of the soluble lauric, myristic, and oleic soaps. This shift in the kinds of soap molecules in the liquid phase usually creates a faster building, more abundant lather for a smaller amount of work. The larger amount of less-soluble soap in the soap crystals has the benefit of making the soap more resistant to wearing away from use.

The concentration of stearic and palmitic soaps in the solid crystals begins when enough water evaporates to trigger the salting-out process. But the migration of insoluble soaps into the crystals and the transfer of more-soluble soaps into the liquid phase is not a fast process. It arguably can take months for this migration to stabilize in a handcrafted bar of soap.

And that, in not a nutshell, is why curing soap is a complex process that goes beyond water evaporation. The glycerin and other dissolved chemicals must be concentrated enough so soap molecules start to salt-out. Only water evaporation will accomplish that task, so it is a necessary beginning to the curing process. But once sufficient evaporation happens, the slower process of restructuring the soap then begins.

Are there other ways to force this shift in the crystal structure and the liquid phase?

Yes, if you have the equipment. Commercial soap makers quickly dry their freshly made soap to the desired water content, and then mix the dried soap chips or noodles under pressure using a machine called a "plodder." The soap is then pressed or extruded into finished bars. With careful control of the drying and plodding steps, the soap will form the desired crystal structure.

For handcrafted soap makers, the most practical solution is to allow time to solve the problem -- time to finish saponifying, to evaporate water, and to develop the crystal structure.

Does liquid soap need to cure too?

Liquid soap doesn't have a solid crystalline structure, and it doesn't need to dry.

A "cure" time for liquid soap is mainly to allow time for the last bits of saponification to finish and allow any particles that might be in the soap to sequester (settle out).

Since liquid soap can be made of any fats, including coconut oil, it can be as stripping and harsh as any bar soap -- perhaps more so since the superfat in liquid soap is usually low. Dilution can modify harshness -- more water in the diluted soap will reduce the cleansing action.

My challenge to the skeptics

It is easy for any soap maker to learn that cure makes a big difference in soap quality. Try a long-term experiment with a few bars of your favorite freshly-made soap. Test the quality of the lather, longevity, and hardness of the bar and mildness to the skin over at least 3 months, preferably longer. Measure the water loss during this time. Keep good written notes as you go -- do not count on your memory to be accurate. At the end of this time, see what your test results show.

A story to illustrate this point:

I agree the extra-long cure time needed to turn this mostly-lard soap from a duckling into a swan is an unusual case, but I think it shows that curing soap is more than simple water evaporation. High oleic soaps (olive oil soap for example) also need a longer cure time for best performance. In my experience, however, soap made with a more balanced blend of fats should perform decently well after a 4-8 week cure, with a more gradual improvement after that time.

I know of no easy shortcuts -- handcrafted soap needs at least 4-8 weeks of cure to perform well and some will benefit from even more time. Repeated tests of lathering, hardness, longevity, and mildness have proven this point to me. Try it for yourself, if you have not already, and see what you think.