The flash point of fragrances are often used by soap and lotion makers to determine how cool the product should be before fragrance is added to prevent excessive evaporation of the scent from the product.

Many soap makers follow a rule that says fragrances should be added to soap (or other products) only when the soap has cooled below the flash point temperature of the fragrance. This "flash point rule" supposedly minimizes the loss of scent due to evaporation. Fragrances with high flash points can be added when the product is hotter, and vice versa for fragrances with low flash points.

What is the flash point?

The flash point is defined as the lowest temperature at which vapors will ignite when exposed to a spark in the open air. The lower the flash point, the more easily the chemical will ignite.

Some substances do not have a flash point -- they may not produce vapors that burn, or they chemically degrade before they reach a flash point.

Other substances like gasoline and other fuels, high-alcohol liqueurs such as brandy or whiskey, essential oils (EOs), and many fragrance oils (FOs) do have a flash point temperature that is low enough to be a safety risk. For safety's sake, it is always wise to keep substances with a low flash point away from spark or flame.

The "flash point rule" assumes the flash point temperature predicts how easily the fragrance will evaporate, but I have never seen anyone provide concrete information that shows how flash point relates to volatility -- the ease at which something evaporates.

What is vapor pressure?

Chemicals with a high vapor pressure evaporate easily -- they are volatile. A material will evaporate more amd more easily as the temperature increases until the temperature reaches the boiling point of the material.

Substances are still able to evaporate, however, even when they are cooler than their boiling point.

If a fragrance is not able to evaporate, even slightly, when it is cooler than its flash point or boiling point, your soap would never lose its scent ... and you would not be able to smell the scent.

Can the vapor pressure of a fragrance be predicted by its flash point?

Is there a useful connection between the flash point and vapor pressure?

The chart (below) correlates the vapor pressure with flash point for 55 fragrance oils sold by a well known fragrance supplier. I picked these FOs randomly from the supplier's website.

Note: The abbreviation "mm Hg" stands for "millimeters of mercury" which is a unit of pressure. Normal atmospheric pressure is around 760 mm Hg. Blood pressure is often measured in mm Hg. 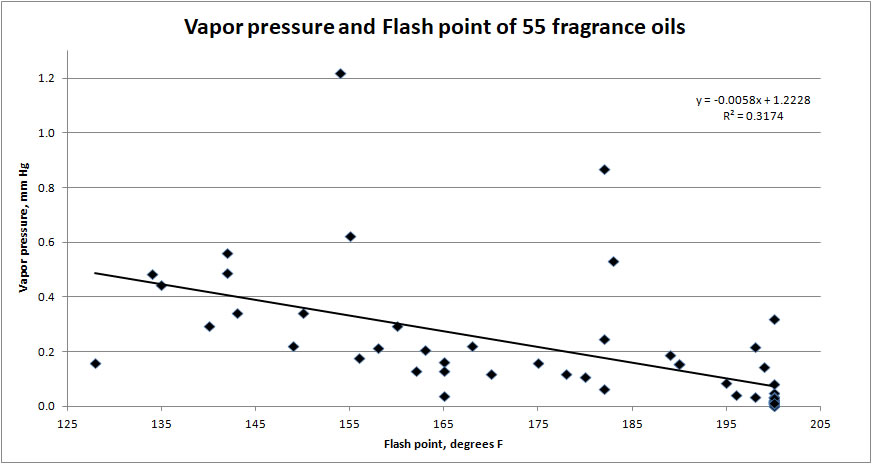 The vapor pressures for these 55 fragrance oils are extremely low -- between zero and 2 mm Hg. Compare that with normal atmospheric pressure (760 mm Hg) or typical human blood pressure (120 / 80 mm Hg).

The vapor pressure of water is about 24 mm Hg at room temperature. This is at least 20 times more volatile than the FOs in the chart. Water does not ignite when exposed to flame, so has no flash point temperature.

The conclusions I draw from this evaluation --

The FOs studied have vapor pressures that are low (~1.2 mm Hg or less). This means these FOs evaporate slowly -- much slower than ethyl alcohol (44 mm Hg) or water (24 mm Hg).

The FOs studied show big differences in flash point temperatures, but only small differences in the vapor pressures (~1 mm Hg or less). This means all these FOs will evaporate at about the speed under same environmental conditions.

Bottom line -- The flash point is not useful for learning about how volatile a fragrance oil is.

Tips for using fragrance oils in your products --

Add fragrance to soap when the soap is as cool as is reasonable.

Use fragrances proven to be strong and stable in soap.

Exposure to alkali (NaOH or KOH) and the lasting alkalinity of the soap itself are hard on fragrances. Many fragrances work fine in lotions and candles, but smell weak or fade over time when used in soap.

Know the flash point of your EOs and FOs for your personal safety.

Do not work with EOs and FOs around open flame or sparks, and that is especially true of the ones with low flash point temperatures.