Classic Bells > Soapy stuff > What is a chelator

What is a chelator?

A chelator (or chelant) is a molecule that has the unusual ability to attract and securely hold onto certain types of metal ions. In soap, a chelator does two things --

The most important job of a chelator is to protect soap from rancidity by immobilizing tiny bits of trace metals that can cause soap to quickly become rancid. Soap that is rancid will smell "off" or musty. The soap will either turn entirely orange (all-over rancidity) or it may develop unsightly orange dots or splotches that soapers call "DOS" or "Dreaded Orange Spots."

A chelator can also reduce the sticky, irritating soap scum created when lye-based soap is used in hard water. Metallic calcium and magnesium ions in hard water are the minerals responsible for making soap scum. A chelator is helpful, but is not a perfect solution to soap scum. Learn more....

A chelator has this unusual abililty to immobilize metals because its molecular structure has two or more electrically charged "claws." These claws attract and trap electrically charged metal ions. Each claw by itself is not very strong, so a molecule must have multiple claws to successfully function as a chelator.

Where does metal contamination come from?

Traces of metallic contamination in soap come from many sources -- the machinery needed for harvesting and processing natural ingredients, tap water, your utensils, dust and pollution from the air, contamination on your hands, ingredients that naturally contain metallic compounds, and so on.

You can reduce metallic contamination, but you can never entirely eliminate it.

What metals can chelators remove?

Sodium and potassium are examples of monovalent metals (metallic ions with only one charge); these metals cannot be trapped by a chelator.

What are effective chelators for soap?

Citrate -- This is the ion that is created from sodium citrate or potassium citrate. Citrate has three "claws" in its structure to attract and catch a metal ion. For the chemistry geeks, the claws are negatively charged organic acid groups (COOH). The three O- symbols (below) represent citrate's claws. 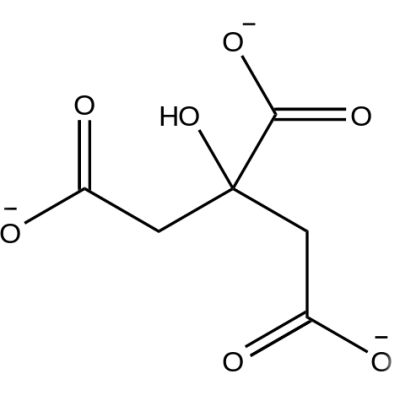 EDTA -- This is the ion created from tetrasodium EDTA. It is a chelator because it has six claws in its structure that can trap and hold a metal ion. Again for the geeks, these are four organic acid groups and two electron-rich amine (nitrogen) groups. The O- and N symbols (below) represent EDTA's claws. The red M symbol is a metal ion trapped within the EDTA structure. 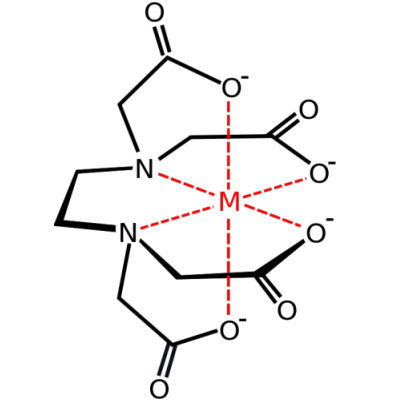 EDTA is often used in food, medicine, and industry because it is such an effective chelator and it is not acutely (quickly) toxic to humans and other animals.

It may cause long-term problems when released into the natural environment, however. EDTA biodegrades very slowly and continues to immobilize metals in soil and water. Living organisms require trace amounts of metals for growth and good health. If EDTA removes too much of these necessary metals from soil or water, living organisms may not thrive. When EDTA finally does degrade, it can quickly release these metals back into the environment in large, toxic amounts -- a damaging boomerang effect.

Gluconate -- This chelator is made by fermenting sugars. Its negatively charged organic acid group (COOH) is the "claw" that captures metal ions. My current understanding is that two gluconate ions attach themselves to each metal ion (such as the calcium ion (Ca2+) shown below) to immobilize the metal ion. I suspect the many OH groups on the gluconate molecule may also get involved, but I cannot verify that at the time of this writing. 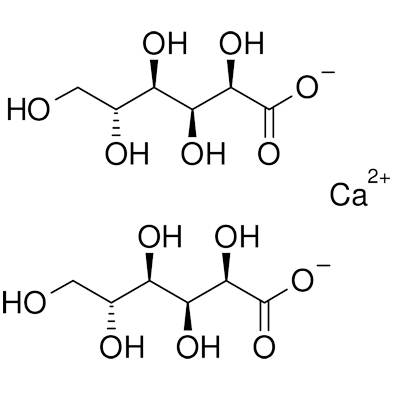 Sodium gluconate is very stable in the absence of microorganisms, but it breaks down (biodegrades) quickly when microorganisms are present. This ability to quickly decompose in the natural environment is a major benefit of SG, compared to EDTA which does not biodegrade easily.

The manufacturer Jungbunzlauer reports 98% of this chemical will biodegrade in 2 days. (1)

Other chelators such as glutamic diacetic acid (GLDA) also biodegrade quickly, so they are not as likely to create a boomerang effect in the natural environment. Some of these chelators are proving to be as effective as EDTA, and I expect them to become widely recommended and more easily available to us small-scale makers.

Can other chemicals be chelators?

Sodium acetate and sodium lactate are two household chemicals that can indeed function as chelants. They are sometimes used for that purpose in foods and medical treatments.

I do not see acetate and lactate being recommended as chelants in soap or cosmetics nor for treating minerals in hard water. The chelators normally suggested for these purposes include EDTA, citrate, gluconates, GLDA, etc.

Not every chelator is effective for every purpose. Acetate and lactate should be used in soap mainly for the other qualities they contribute, not for their chelating ability.