Whole eggs, egg yolks, and especially egg whites have been added to soap for at least 100 years.

The venerable Swedish soap Lanolin-Agg-Tval (1) contains egg white. These tiny (50 gram, 1.75 ounce) bars are touted as the Swedish secret for a lovely complexion. In 1908, authors W.H. Simmons and H.A. Appleton were less enthusiastic:

"...The use of albumen [egg white]... in soap has been persistently advocated in this country [the United States] during the past few years. The claims attributed to albumen are, that it neutralises free alkali, causes the soap to yield a more copious lather, and helps to bind it more closely... Experiments made by the authors did not appear to justify any enthusiasm on the subject, and the use of albumen for soap-making in this country appears to be very slight, however popular it may be on the Continent...." --Simmonds and Appleton, Handbook of Soap Manufacture, 1908.

Egg yolk supposedly adds richness or thickness to the lather, perhaps due to the 1 gram of lecithin per yolk. Lecithin, an emulsifier and surfactant, is thought to slow trace when working with accelerating fragrances. Some say it helps a little; others say it does not slow trace and also softens the soap. There is only a small amount of lecithin in egg yolk, so it is unlikely to have much effect either way.

So far, I have used only whole eggs in my soap, but you can use just yolks or whites as you please. The egg soap batches I have made seem to saponify and harden in the mold about the same as non-egg batches. I do not see any obvious difference in the hardness, lather, and other qualities of the finished cured soap. Like Simmonds and Appleton, I do not think egg is a miracle additive, but it is fun to include and adds label appeal. 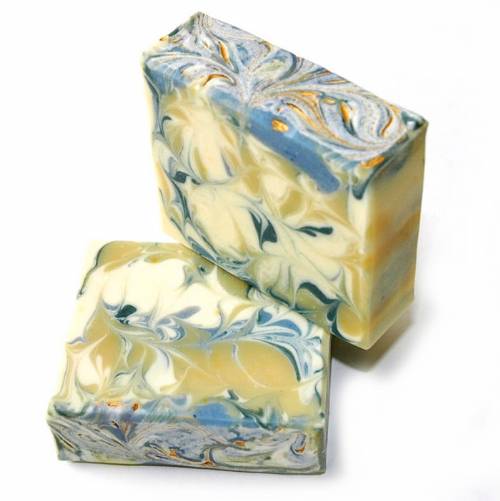 A couple of bars from a recent batch of egg soap.

How much to use

Adjust for the water in egg

Whole egg or egg white will add considerably more water. One whole egg per pound or per 500 grams of fats will supply 15% to 30% of the total water needed to make the soap and the white alone will add almost that much.

Adjust for the fat in egg

A whole egg or egg yolk per pound (or 500 grams) of fats adds only a small amount of fat to the recipe. Whether you ignore this added fat or not is up to you. If you want to include the egg fat in the soap recipe calculations, here is how --

Many soap recipe calculators, including SoapmakingFriend.com, Soapee.com, or SoapCalc.net, do not have an entry for egg fat, but there is a work-around solution for that. The saponification value of egg fat is the same as for canola oil -- about 0.133 -- so use canola oil as a stand-in for the egg fat.

Enter 5 grams of "canola oil" for every egg yolk you want to use. This will trick the calculator into calculating the correct weight of NaOH for your recipe.

How to add eggs to soap

A few points to remember --

Curdling happens when egg proteins are able to clump together during cooking to form unpleasant lumps. Prevent curdling by starting with cool ingredients, by diluting the egg with other liquids before soaping (3), and by letting the soap warm up gradually during saponification. These tips will help prevent hard bits, nasty odors, and weird colors in your egg soap.

All ingredients should start at room temperature to just slightly warm (below 105 F or 40 C).

Cold process (CP) soap making works fine, even if the soap eventually gets warm enough to gel. I have not personally tried hot process (HP), so I cannot say how that works. I have seen a photo of HP soap that contained egg yolk. This soap was a light tan, indicating the yolk color may darken during the HP cook.

Here is the method I have used --

Crack the egg(s) into a small bowl. If you want just the yolks or whites in your soap, separate the egg and reserve the unwanted part for another use.

Stick blend the egg until smooth. There is no need to pick out the chalaza (the white ropy bit on one side of the yolk) or any other membranes.

Check that the fats are cool enough. Pour the blended egg into the fats. You can pour the egg through a strainer to catch any small bits the stick blender missed.

Stick blend for a few seconds to bring the eggs and fat to a consistent temperature. The mixture will quickly separate after you stop mixing, but that is okay.

Make sure the lye solution is cool enough. Add the lye to the fat and egg mixture. Make the soap as normal. Right after adding the lye, the batter may darken and there may be an ammonia or "rotten eggs" odor for a short time. These changes are typical.

Allow the soap to saponify. I do not insulate the mold nor add extra heat (CPOP, heating pad, etc.) I only lightly cover the mold to help the surface of the soap stay a bit warmer and keep the dust off. My goal is to let the soap warm up slowly on its own.

Even without insulation or extra heat, all my batches of egg soap have gelled. There have been no lingering odors or unexpected color changes.

By blending the eggs with the fats and soaping on the cool side, I have noticed only a small whiff of odor right after adding the lye, but I have not observed any weird colors, hard lumps, or lingering odors that other soapers sometimes mention.

More info about eggs in soap

Egg Yolk Soap (recipe and tutorial) by Nymeria on Craftster.org

Egg yolks in soap thread on the Soap Making Forum