"Glycerin rivers" refers to unexpected cloud-like, watery looking, or net-like patterns that sometimes form in bar soap. Parts of the soap will be translucent and parts will be opaque.

"Glycerin rivers" have nothing to do with glycerin really. The glycerin is not somehow separating out or whatever. The pattern is created as a part of the soap itself. It is a normal thing that soap does when the conditions are right.

It is more accurate to call this effect "crackling", "marbling", or "mottling", but handcrafted soaping tradition insists on the name "glycerin rivers" even though it's misleading.

Why does crackling happen?

Soap is made of many different kinds of soap molecules. Oleic, stearic, and palmitic soap molecules are usually the main types found in many soaps, although the composition of any given soap depends on the fats used to make it. The key point to remember is some of these soap molecules are opaque when they are solid and some are translucent.

So what causes this crystallization to be visible?

When a batch of soap gels (turns into a soft semi-liquid paste) and then cools, the palmitic and stearic soap molecules crystallize first to create opaque crystals. The liquid oleic soap molecules flow out and away from these solidifying bits of stearic and palmitic soap. This process of crystallization and separation causes the opaque stearic and palmitic soap to build up in some areas and the translucent oleic soap to concentrate in other areas.

The oleate soap molecules eventually solidify, but only after the soap cools a bit more. If this process of crystallization and separation is allowed to happen slowly enough, the opaque and translucent parts of the soap become large enough so they are visible to the naked eye as crackles and rivers. If the process happens faster, the different crystals remain very small and pretty much invisible to our eyes.

The process of crystallization and separation happens often. Here's an example -- Have you ever put a can of soda pop in the freezer and forgot about it? If you take a close look at the frozen soda before you clean up the mess, you'll see translucent ice crystals floating in a thick syrup of dark, sweet soda syrup. If you could cool the soda syrup even colder, the syrup would also eventually freeze. The result would be a mixture of clear ice crystals surrounded by frozen syrup. This is the soda pop version of "glycerin rivers" in soap.

Another example is making fudge or taffy. If you do not stir fudge long enough or knead taffy properly, the finished candy will have large gritty sugar crystals in it. If you do things right, the sugar crystals remain tiny and the candy is smooth, pliable, and silky.

But don't you have to add titanium dioxide to make rivers?

It is true that crackling is usually hard to see in plain soap -- one that does not contain pigmented colorants, such as titanium dioxide -- but the effect is still sometimes visible. Crackling or rivers can be especially obvious if the water content varies throughout the soap.

Crackling due to water-variation can be intentionally caused by deliberately adding more water or a water-based ingredient only to one part of the soap batter and mixing that portion of batter into a separate portion of lower-water batter.

It can also happen unintentionally when a colorant (such as titanium dioxide) is mixed with water and then added to a portion of the batter. This increases the water content in that part of the soap which can lead to crackling. 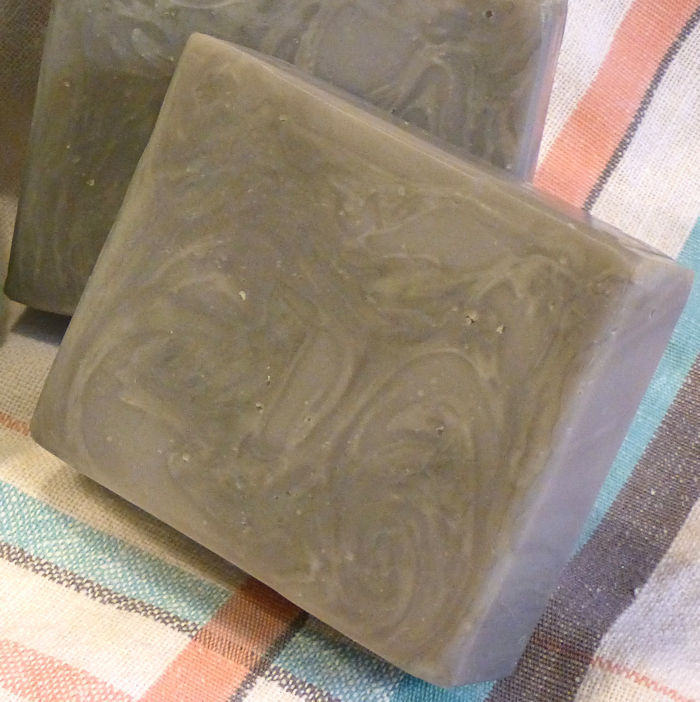 Crackling and rivers are more dramatic, however, when pigmented colorants are used. The reason for that is pigments tend to concentrate in the soaps that stay liquid the longest. The migration of the pigments creates visual contrast. The slower the crystallization, the more the pigment will be concentrated.

Titanium dioxide (TD) seems to be the main culprit for emphasizing crackling, but other pigments can highlight the crackled look. In the 1800s when mottled soap was popular, soapmakers used brown, red, or blue pigments to make their mottled soap.

The pale yellow portion of the soap in the photo below was lightened with titanium dioxide pigment mixed with glycerin. That portion of the soap has puffy or curdled mottling throughout. The darker yellow swirls were colored with annatto infused in sunflower oil. Those areas are more translucent and do not show obvious crackles or rivers -- 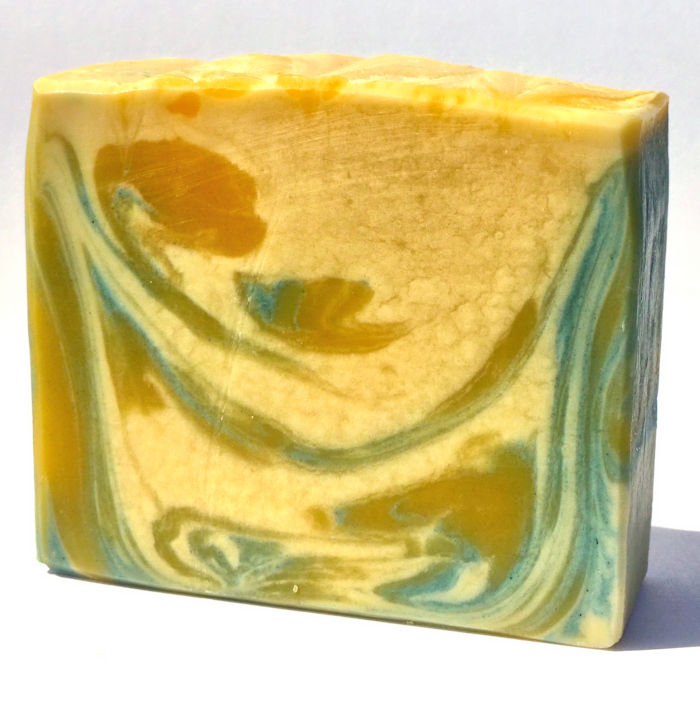 So is crackling caused by the amount of water in the soap?

Water content is not really what causes a soap to crackle, although I can see why one might think that. What water content DOES do is affect whether the soap is likely to gel or not at relatively low temperatures.

High-water soap goes into full gel at a lower temperature than a soap that has less water, so high-water soap is more likely to show cracking and rivers.

Even if a soap gels, that does not mean it will automatically crackle. The soap must also cool slowly enough to give the soap crystals the time they need to grow large enough to be visible.

Is crackling a defect in soap?

Beauty is in the eye of the beholder, and so it is with crackling. It has essentially no effect on the performance of the soap. Whether the look of crackling or rivers is a good thing or a bad one depends on your point of view.

The old soap makers (1800s to early 1900s) intentionally made marbled soaps that were popular with the customers of the day. A marbled soap could only be made using a pure soap that had not been adulterated with too much flour, clay, or other cost-cutting fillers. The marbled look was proof the soap was pure and high quality.

"...When [soap] is permitted to cool rapidly the colouring matter remains uniformly disseminated throughout the mass; but when means are taken to cause the soap to cool and solidify slowly a segregation takes place: the stearate and palmitate form a semicrystalline solid, while the oleate, solidifying more slowly, comes by itself into translucent veins, in which the greater part of the coloured matter is drawn. In this way curd, mottled or marbled soap is formed..." (1)

I really don't want rivers in my soap, so how do I prevent them?

Account for ALL sources of water when calculating the lye concentration. The little bits of water in EDTA or citrate solution, water-soluble colorants, aloe gel, pureed food additives, etc. all add up. For example, the last batch I did had 1600 grams of fat (about 3.5 pounds). If 44 grams (about 3 tablespoons) of extra water were added to this batch, that would lower the lye concentration from 33% to 31% and increase the chance that the soap would gel.

Make sure your soap batter is well mixed before pouring the batter into the mold. Scrape the sides with a spatula and stir well.

If you are uncomfortable with the idea of using less water or rivers are still forming even after reducing the water content in your soap, here are other things to try --

Avoid the CPOP (cold process, oven process) method. The CPOP method that most of us use nowadays calls for prewarming the oven to 110-140 F (45-60 C), turning the oven off, and putting the molded soap into the warmed oven. The soap stays in the oven to saponify while the oven slowly cools. This can be a good way to grow a nice crop of crackles and rivers, especially if you use a recipe with a lower lye concentration and add titanium dioxide or other pigments.

Cool the soap quickly after it gels. If the soap gels on its own or if you want to use CPOP to get brighter colors, you can let the soap reach full gel and then encourage it to cool quicker. Many people put soap into the fridge or freezer. A faster and more energy efficient way is to simply use a fan to cool the molded soap. If possible, set the mold on a cooling rack or on several food cans so air can flow underneath.